After hearing countless people recommend grabbing some affordable and authentic Asian fare in Asan city’s international area, I decided it was time to make the 1.5 hour trip south of Seoul to check out what the buzz was about.

While Seoul’s Itaewon area usually gets all the attention for offering the best foreign food, the truth is that it is largely dominated by Western immigrants, with cuisine to match (American, French, Canadian, South African, Italian, etc).

Despite the fact that a few non-Western restaurants can indeed be found in Itaewon, many expats seem to agree that the most authentic and budget-friendly Asian foods lie in Ansan, a city a short commute south of Seoul.

Ansan doesn’t exactly have a pristine reputation among Koreans, due to the higher crime rates attributed to migrant Asian workers there (“Ansan – Ghetto or Mulitcultural Enclave?”). However, I must say that I didn’t feel unsafe at all walking around the international Wongok-dong neighbourhood. In fact, I found that the people were more friendly than in Seoul!

Here’s what I did this afternoon:

Thai restaurant to the left of the main street entrance 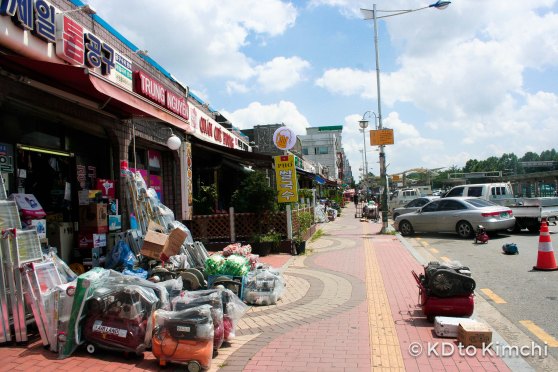 Looking eastward from the front street

Vietnamese restaurant outside the Asian village 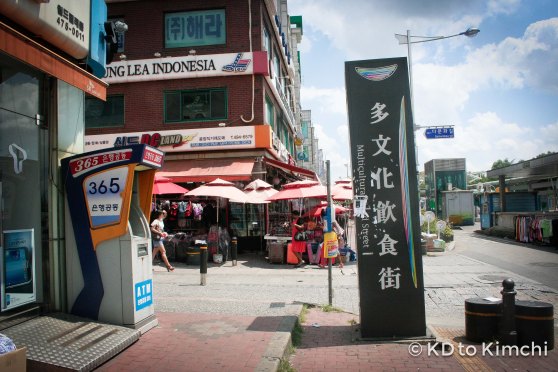 A sign pointing to the main street of the Asian vilalge 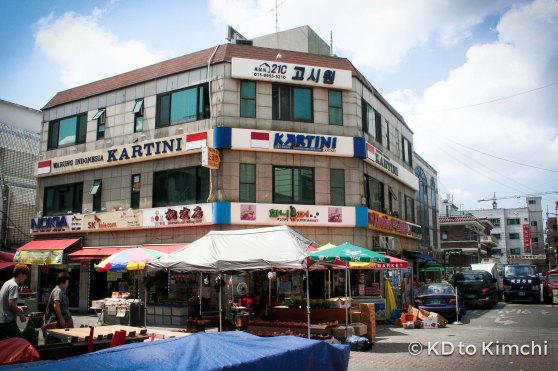 One of the first buildings you see upon entering Ansan

After walking down the main drag for a couple blocks, I hit this centrally-located park. It was pretty much empty, and (at least in my opinion) ugly. I boosted the colour and contrast in these photos; in reality, the park looks like a grim Soviet-era artefact. Maybe if they got rid of the concrete and added grass instead…

A park in the centre of Ansan’s Asia Vilalge 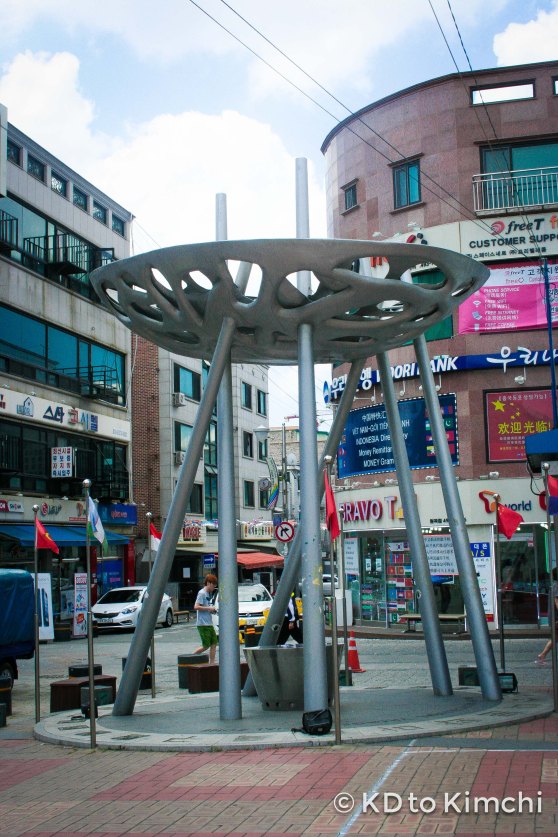 A monument in the Asian village park

“Eid Mubarak” message from Woori Bank nearby the park

The global monument in the park 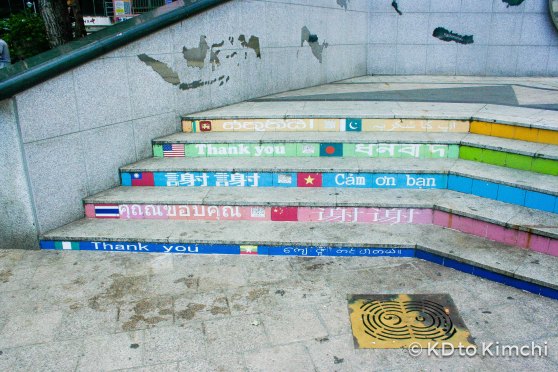 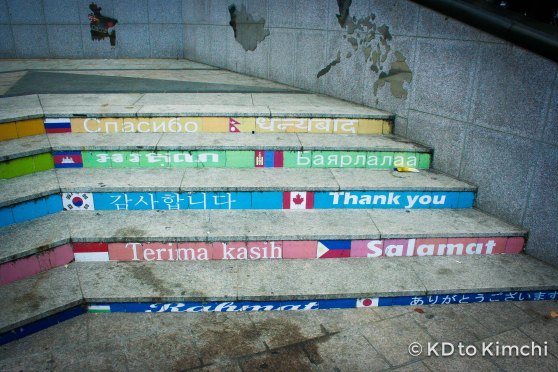 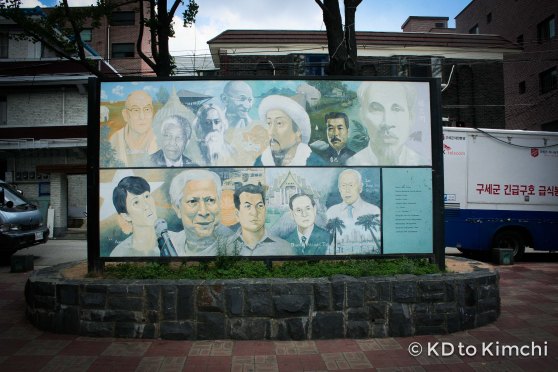 A faded mural of famous Asian icons in the park

The names of the Asian figures 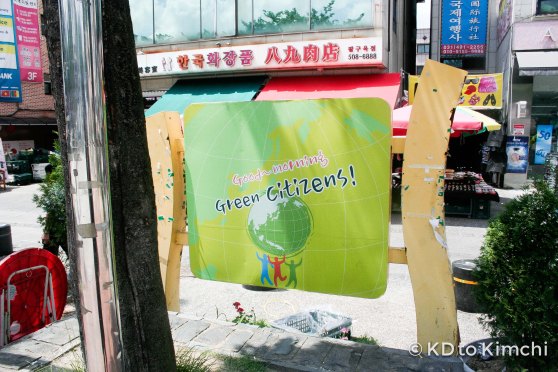 A map of Ansan’s Asian village in the park

No peeing in the park! 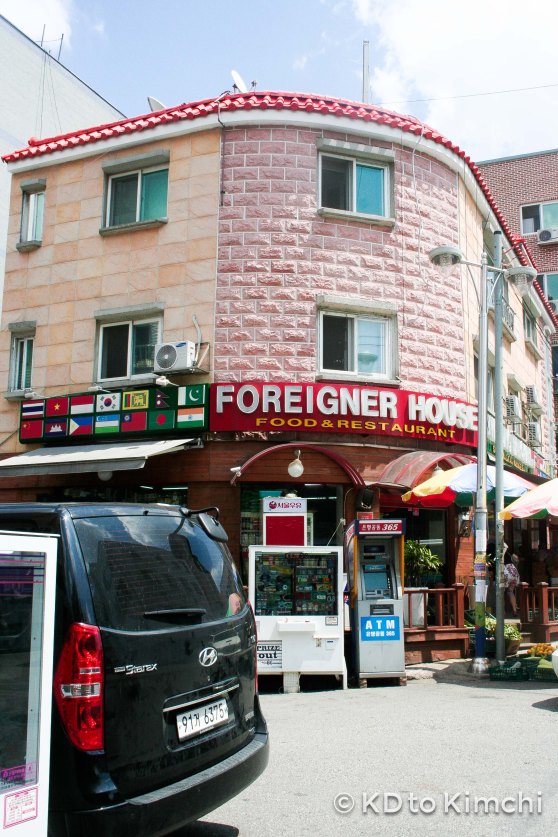 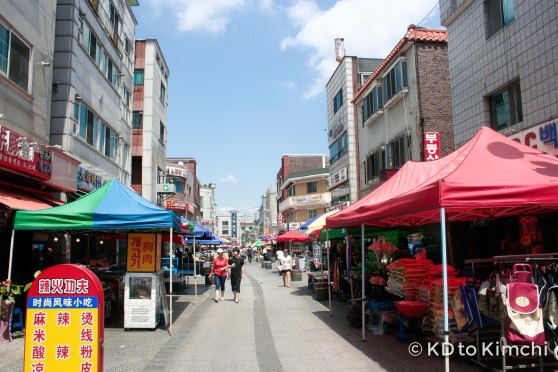 The main drag of Asia town

A street filled with Chinese restaurants 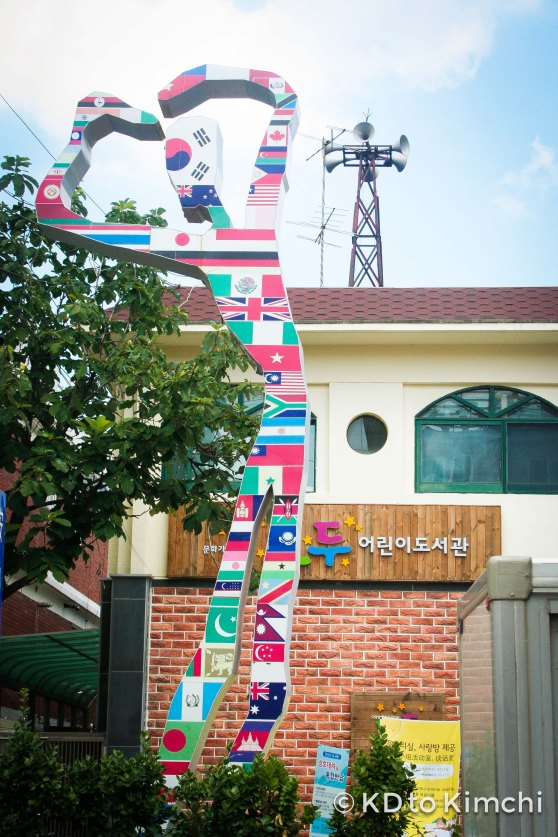 Artwork outside an administrative building 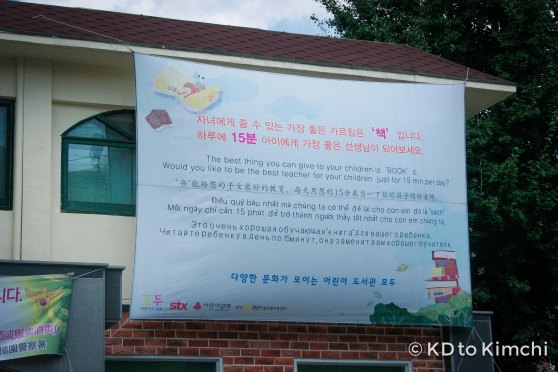 A message from your local government! 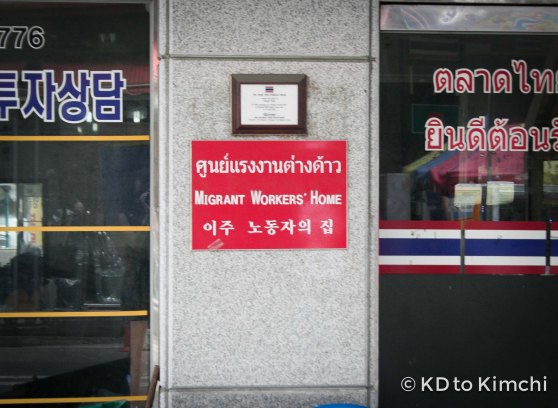 After strolling around a bit, I finally happened on Samarkand Kafé, a Uzbek restaurant that had received good reviews online. I awkwardly walked in, not sure whether or not I should do the usual head-nod/bow and “annyeonghasseyo!” (“hello!”) that Korean etiquette requires, since the server was  (obviously) from Uzbekistan.

I decided to order one “samsa” (spiced meat and rice-filled pastry) as a starter, based on the couple reviews I read online. Good. freaking. choice.

After another awkward fumbling around with words and culture (the server thought I was Uzbek and spoke to me in the corresponding language), I was brought a steaming warm pastry…

The samsa was made out of flaky pastry, and filled with meat, spices and rice

It was absolutely delicious, though definitely more of a wintery comfort food than something to eat on a hot, humid day! I didn’t care though; it was so good.

For my main, I ordered the also highly-recommended “plov”: tender lamb meat, served with carrots and a rice pilaf. The portion was huge!

I’d read online that Uzbek cuisine is pretty oily, and heavy on the meat and starch. This is true. Again, I’d suggest this type of food for a more wintry day. But yes, again, it was so good that I ate my fill of it! 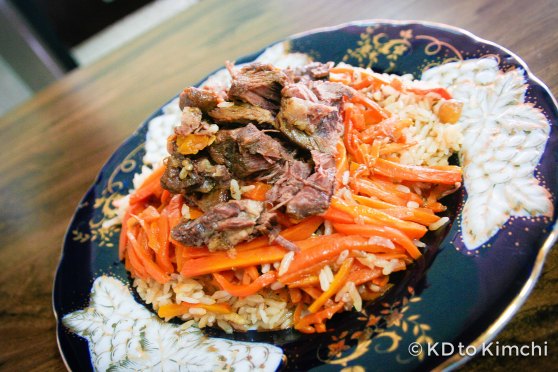 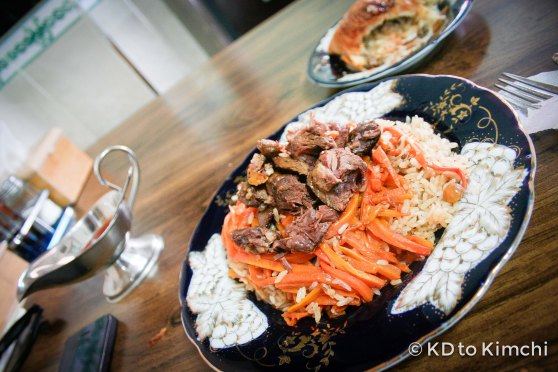 So much meat! The plov was very heavy and filling. A bargain for $7.

The outdoor seating section of Samarkland

After stuffing myself at Samarkand, I made my way back to the station, content that I’d tried something new today.

A Chinese-inspired model outside a cellphone shop

Heading south down the main drag back to Ansan Sation

To get to Ansan Station, take Line #4 Oido-bound and get off at Ansan Station. Leave through Exit 1, and walk straight across the road, using the underpasses. From there, you’ll hit the entrance to Wonggok-dong (ie: Ansan Asia town).

From there, you’ll find lots of different Southeast Asian and Chinese restaurants.

To get to Samarkand Uzbek Kafé, walk two blocks north of the entrance along the main street. Turn left, and Samarkand will be on your left.

The Vietnamese, Thai, Indonesian and Chinese restaurants are too many to count.

However, I’ve read all over the web that the best Indian food in Korea is served at Ansan’s Kantipur restaurant. I considered visiting, but decided to go for Uzbek food (because come on, when’s the next time I’m going to get to eat that??). If you’re interested in dining at Kantipur, check out “The Moose” blog for a review and photos.

Otherwise, I’d recommend just walking around Ansan and seeing what tricks your fancy! The choices are endless.