Today I visted SIWA’s Annual Bazaar and had the chance to browse around the stalls run by various embassies and cultural groups.  I picked up some cheap Korean language books and got showered in freebies, tried the Indian stall’s chickpea curry (but all the naan bread was gone T^T) and had perhaps the BEST dessert I’ve ever tasted: South African cheesecake! Had to pick up some authentic North American baked goods from the US table (which looked straight out of a county fair bake sale). Didn’t buy any Tim Horton’s coffee that the Canadian table was offering though; I feel like a traitor to my people!

I’d found out about SIWA (Seoul International Women’s Association) via facebook last week. One of their sub-groups, Cultural Connections, was having a private event featuring a representative from NKHR (the Citizen’s Committee on North Korean Human Rights) the next day, and since I’m so interested in the situation in North Korea, as well as the work that NKHR does, I figured I’d try to attend. Sadly, the event was “members-only” and the $60 membership fee seemed to expensive to pay without having attended any sort of prior event to get a feel for the group. So, I decided to email them (VERY short notice) about paying a student rate. They replied and told me I could attend the Cultural Connections event for FREE. How nice was that?

The event was held at a SIWA member’s home in Itaewon, surrounded by beautiful houses, European-style bistros, and various embassies from around the world. The event was very intimate, and I think I will pay the membership fee. The only bad part is that most SIWA events are held during the daytime, and as a student living in the largest metropolitan area in the world, I won’t always have time to go to their events between classes. Last week though, I was able to, and I’m so glad I did. The women were very kind and welcoming, and the presentation (which focussed on the situation of children in North Korea) was incredibly moving.

ANYWAYS, fast forward one week later to the Bazaar – I got a little confused finding the museum, but thanks to my trusty TripAdvisor app,  I was able to find my way there eventually. I saw a “visibly foreign-looking” lady who kept walking around confusedly in the same area I was, so I asked if she was headed to the Bazaar and it turned out that she was. We walked there together and then went our separate ways… 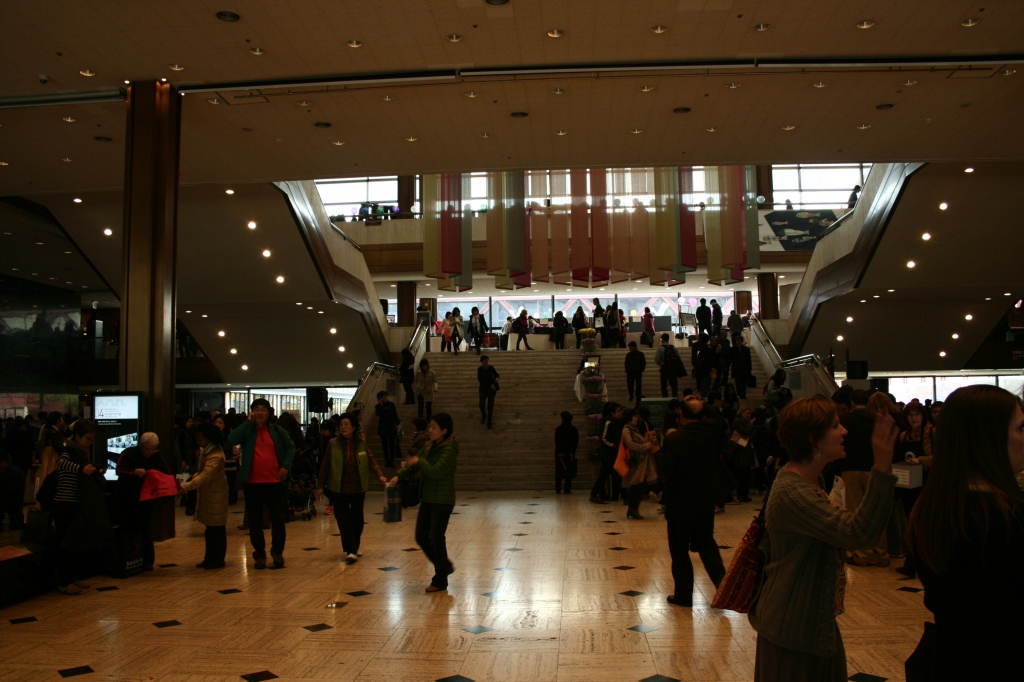 The main hall of the Seoul Museum of History where the event was held.

The bazaar was divided up into two areas: the main area with various national booths, selling everything from jewelry, to apparel, to books, to sweets, to national crafts, liqueur, and more… The other area was the food court! 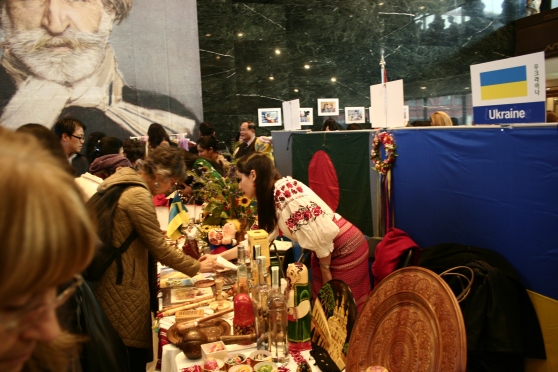 The first table I saw: Ukraine 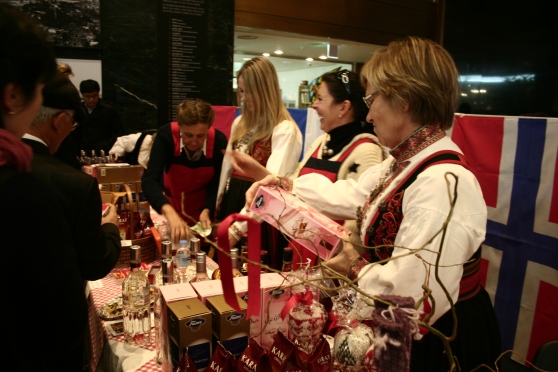 This one was from the Nordic Women’s Club, featuring Norway, Sweden, Denmark, Finland, and Iceland. 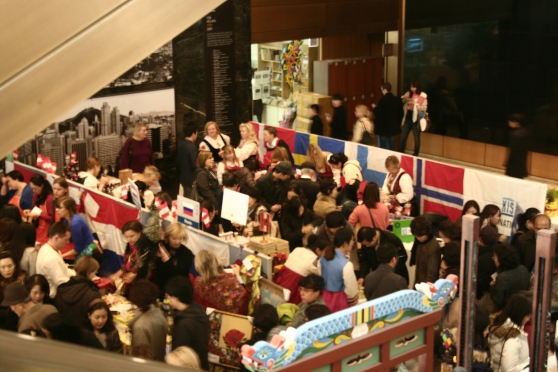 The Bazaar was SO busy! There were about an even amount of foreigners and Koreans.

And now.. onto the food court! 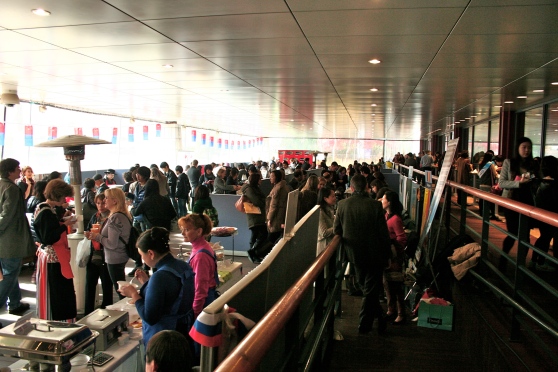 The food court was a festival of foreign tastes and flair, as many countries took the opportunity the present their national cuisine with pride to the event’s many attendees…

Of course, I had to visit Canada’s table first! 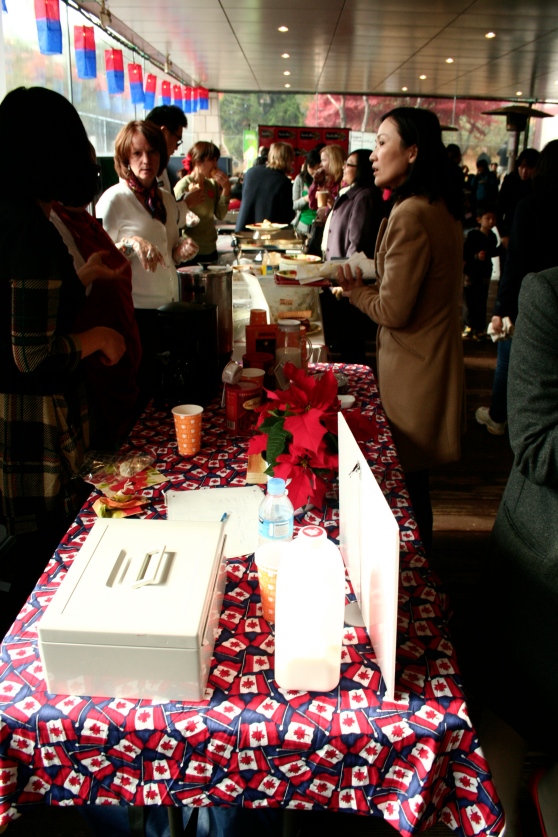 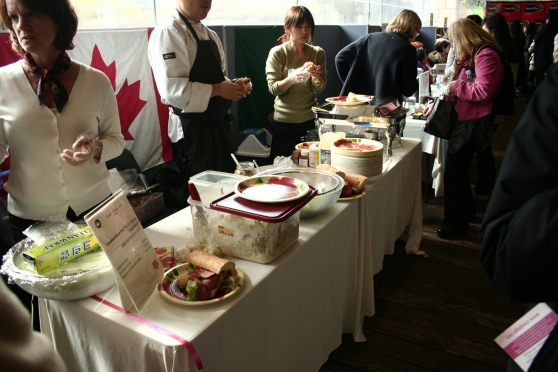 Canada was serving up roast beef sandwiches with potato salad, and to drink: Tim Horton’s coffee! 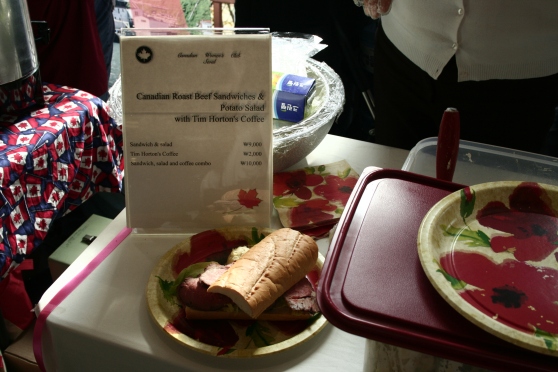 To calculate the amounts, just remove a zero off the end and change the comma to a period – et voilà, a rough equivalent of what the price is in Canadian or American dollars (ex: the coffee was roughly $2). 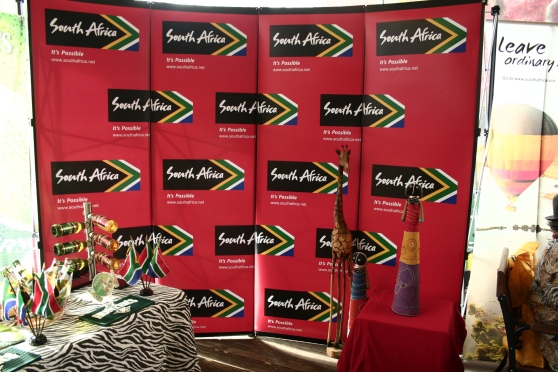 Next was the South African booth, which was definitely the best-decorated! It caught my eye immediately so I decided to go take a gander… 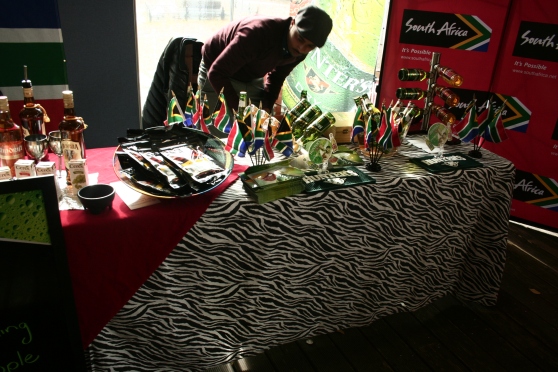 The display was pretty cool! 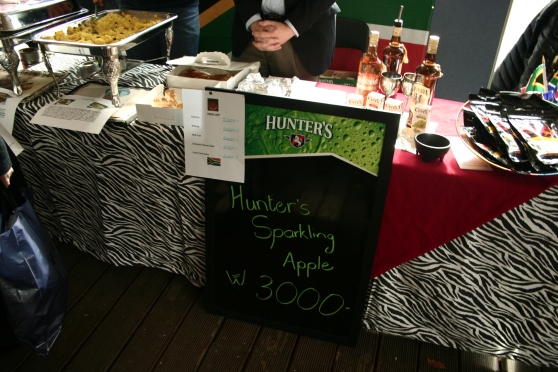 I’d never heard of Hunter’s before, but it sounded really nice. I’m still getting used to the whole concept of being able to drink during the daytime (in Canada, I drive nearly everywhere and have a license that prohibits me from having any alcohol in my bloodstream). I quickly remembered that I was taking the subway back to school, and decided to come back after doing a lap around the room to try some of this yummy-sounding booze. I did make it back to the SA table, however, I totally forgot to buy a bottle of Hunter’s!

I was having a sweet tooth craving, and as soon as I realized that I’d never tasted South African food before, grabbing a dessert from the table’s impressive selection of goodies just seemed logical!

The guys there recommended the cheesecake – it was the last piece so I thought it must be good! And boy, was it ever! I’ve had a lot of desserts in my day (again, just an insatiable sweet tooth!) and this probably ranks in my top 10 – perhaps the best cheesecake I’ve ever tasted.

They also gave me a free shot of Amarula, South African liqueur. What a delicious way to wash it down! I’d never had that liqueur before. 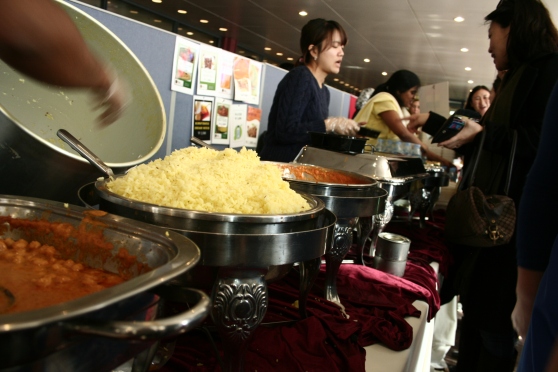 For lunch, I took a trip to the Indian table and decided to try some of their curried chickpeas and naan. Sadly, the naan bread had sold out, so I had their jasmine rice instead – a nice change from the sticky white rice eaten most often in Korea. I’m not a huge fan of the stuff. 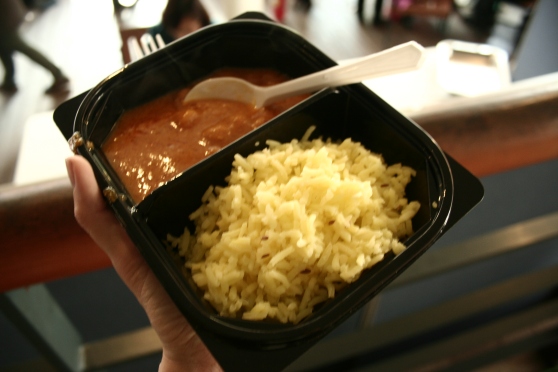 It was good! However, there was barely any room to sit in the food court as it was so crowded… 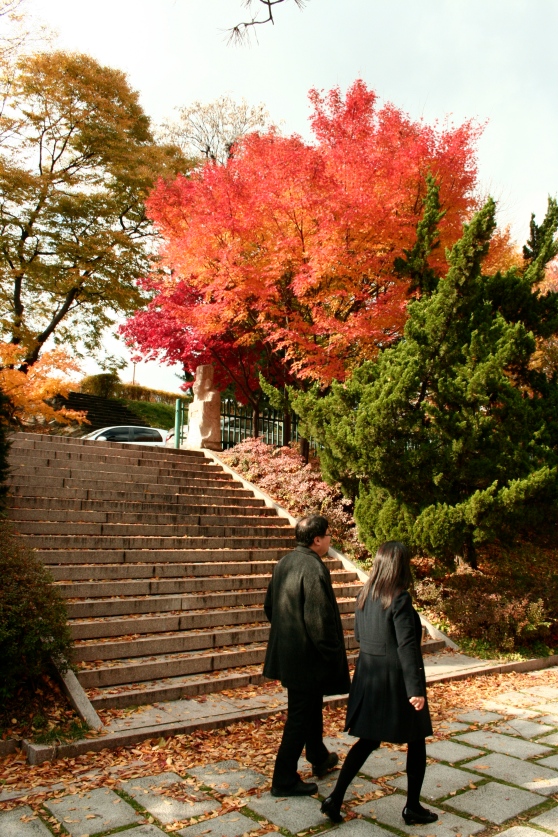 …So, I decided to sit outside. The fall colours were breathtaking. 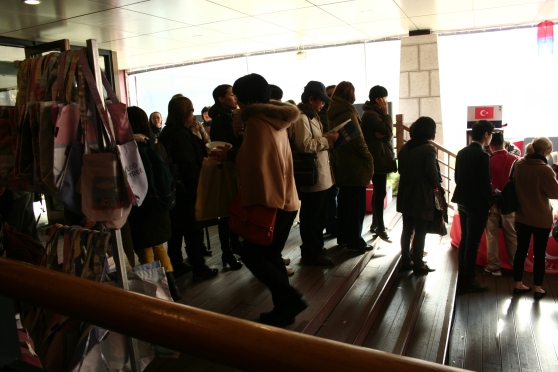 On my way out from the food court, I saw how HUGE the line for Turkey’s kebab station had grown! Obviously a popular selection! 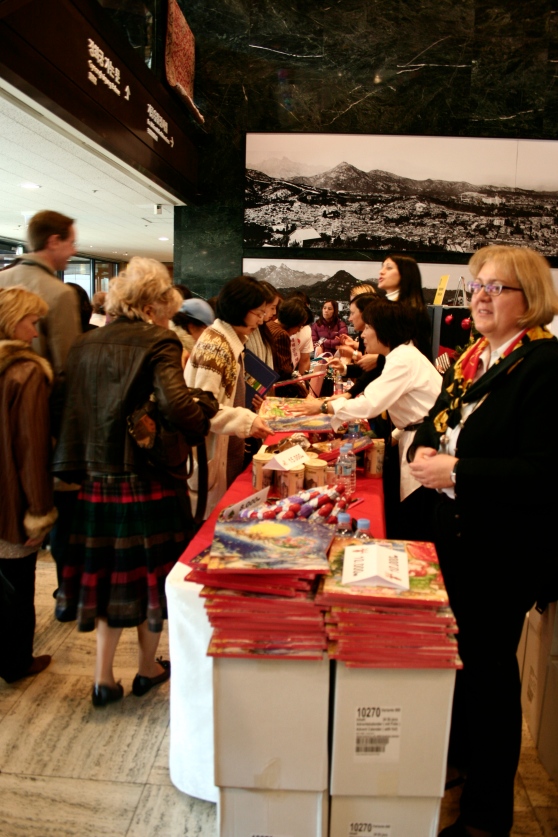 On my way to see the other booths, I passed by Germany’s. They were selling advent calendars for $10 a piece! 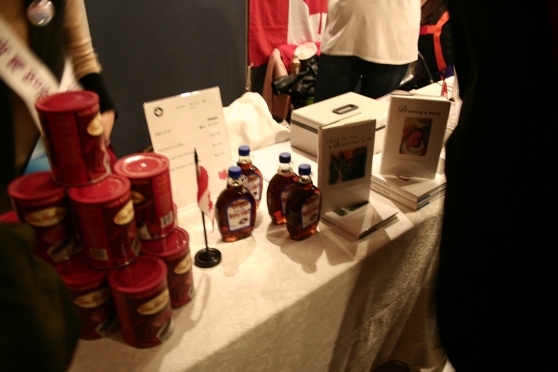 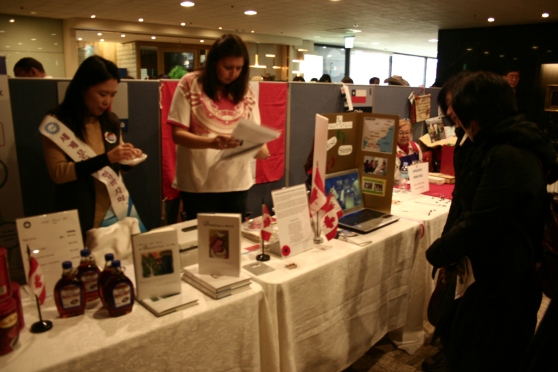 The Canadian Women’s Club (CWC) had organized this table – even had a mini Remembrance Day display. 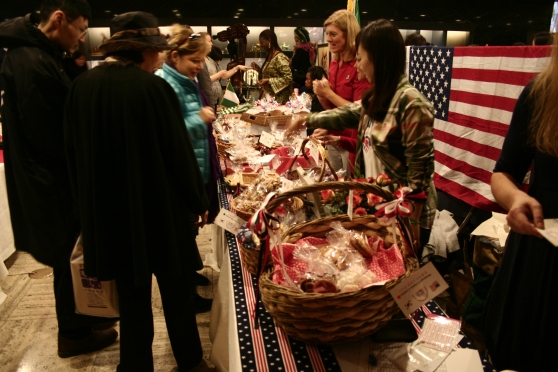 In true geographic style, across from Canada’s booth was the US’s. It looked like it was straight out of a county fair! Decent baked goods are hard to come by here in Seoul, as the price for butter is so high. Yes, you can buy cookies at nearly any of the countless convenience stores or chain bakeries that dot the streets of Seoul, but what you end up with is a cookie devoid of any moisture – biting into a hockey puck might be a more pleasant experience (but at least the hockey puck wouldn’t crumble all over you..)

And, of course, since our cooking facilities in the dorms are limited to a single microwave per floor, it’s not like I have the option of baking at home.

It was way too hard to choose which things I wanted! The prices were quite reasonable, but I didn’t want to empty my wallet on cookies that I would gobble up in a matter of days 🙂 There were sugar cookies, those little peanut butter cookies with Hershey kisses on them, ginger snaps, lemon zucchini and pumpkin bread, pumpkin tarts, snickerdoodles, raisin cookies, and the list goes on! I decided on ginger snaps and snickerdoodles, although I was seriously eyeing up some of that lemon zucchini bread! Willpower, willpower… 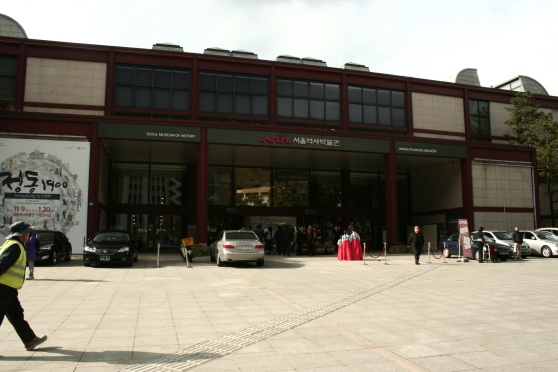 This was the venue for the event, the Seoul Museum of History in the city’s Gwanghwamun district. 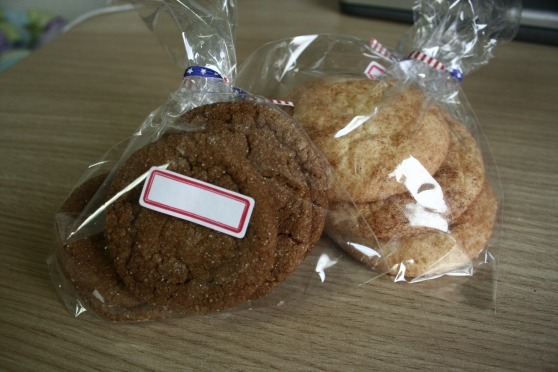 The ginger snaps and snickerdoodles 🙂 I shared the ginger snaps with a couple American classmates in my Project Management class right after coming back from the bazaar. Aaaaaand then I ate all of them 😛 So much for “willpower”. There’s only half a snickerdoodle left too; I’m saving the one full cookie that’s left for my roommate. We have this cool system where we randomly give each other food. It’s great. 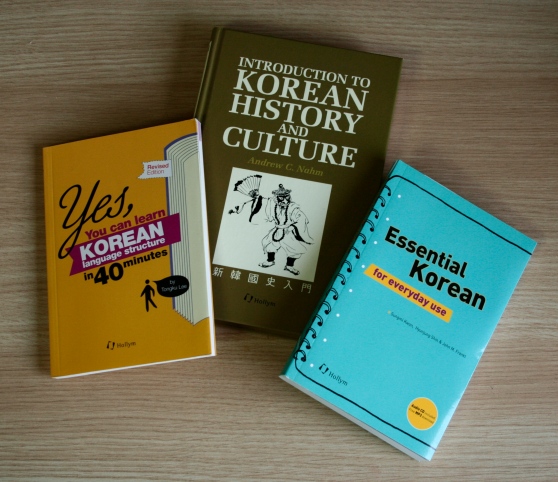 The books I picked up at a Korean publisher’s booth. The two language ones were 40% off, and the culture book was only $3. It’s got a lot of useful history in there which I’m planning on using in some future essays. 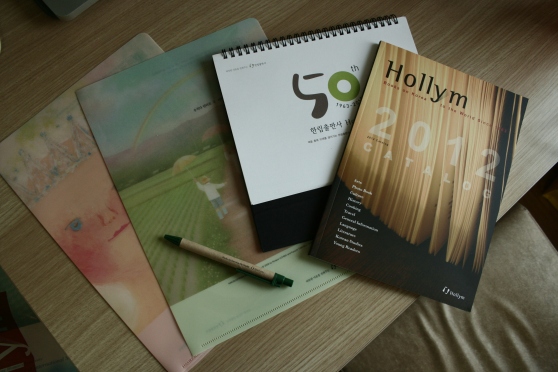 These were all the freebies they gave me for buying the books! I was distracted and looking at some other things while they were bagging my books, so I didn’t even realize they’d given me these until I got back home – I know, super observant right? They gave me a couple folders, a calendar, a pen and a catalogue of their merchandise.

What a fun day at the Bazaar! I was actually surprised to see so many Koreans there; I don’t know why. But here’s one thing I do know: it’s events like these that bring cultures together and help eliminate prejudice, especially at the grassroots level.