Last Saturday, I visited the Hongdae Freemarket, a market run by art students from the nearby Hongik University.

The name “freemarket” doesn’t imply that everything is free, nor is it Konglish (Korean-English) for “flea market”. Instead, the word is supposed to imply some sort of free spirit that art brings.

Hongdae is an area of Seoul named after Hongik University. It is probably the most vibrant “college town” of Seoul (there are 37 universities in Seoul, and I go to one of the ones in the top 10, hehe). By day, there are many artists and performers to be seen, as well as many clothing boutiques priced for student budgets. By night, the whole area comes alive with bars, clubs, restaurants, and 24-hour clothing & cosmetic shops.

I’d been wanting to visit the Freemarket since I arrived in Seoul, however, it always appeared that each Saturday morning/afternoon was spent recovering from the night prior’s activities 🙂 So, with my camera in my purse and no hangover to be seen, I made my way from Heukseok (my neighbourhood of Seoul) to Hongdae…

One of the things I’ve always enjoyed about travelling alone is that you have the freedom to be a little more spontaneous. So after getting off the subway at the Hongik University stop, I decided to check out the Freemarket a little later as I browsed some of the shops and street food vendors.

I’d been wanting to try one of these little egg tart things since I saw them on the Seoul, Korea facebook page. It was good, but sure enough, after taking one bite I dropped it on the ground 😛 I felt sort of embarrassed going back to the vendor and miming out what happened before asking to buy another one, but he laughed and understood. For only about 75¢, it wasn’t too much of a waste. The bread thing kind of tasted like brioche; thick and sweet. I’m not a huge fan of yolks (the texture just kind of throws me off), but I ate around it and it was still good.

At this point, I saw a Seoul Tourism kiosk, so I asked them how I could find the Freemarket and the pointed me in the right direction. 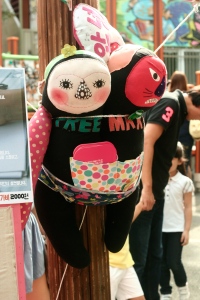 This little guy was at the entrance of the park where the market was being held, how cute! In a sort of weird, wacky, artistic way.. 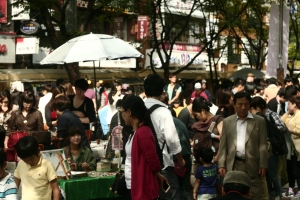 There were lots of people, both Koreans and “weigookans” (foreigners), there on that sunny Saturday afternoon to browse the market stalls.

Students were selling everything from paintings, to mixed-media art pieces, to sculptures, to dolls, to photography, and everything in between. I refrained from taking too many up-close photos of the stalls themselves, as I didn’t want to make the artists uncomfortable (in case they thought I wanted to duplicate any of their works). 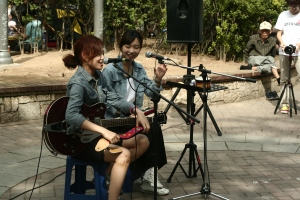 There was also a stage where you could go watch some of the students perform. These girls did a really good job. I have a video of them singing at this link here: http://www.youtube.com/watch?v=8TEaKIg7J1c 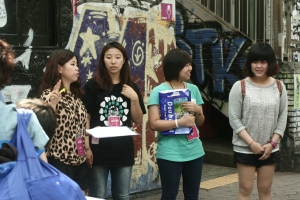 I think these students were leading an art workshop, but not too many people were signing up. I would’ve done it, except I  was worried that my Korean skills wouldn’t have been good enough to understand them 😛 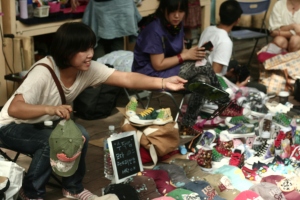 It looked like this lady was selling some ball caps she’d decorated. 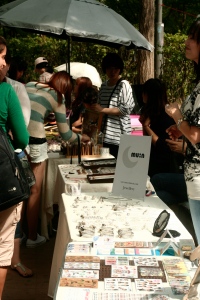 Some more stalls; I think these ones were selling jewelry and stationary.

The art market takes place in Hongdae park, where the (in)famous Hongdae playground is. During the day, little kids play on it. During the night, drunken students convene there, often waiting to meet friends there before hitting up the bar.

The portrait artists’ stalls were easily the most popular. People were lining up left, right and centre to have their portrait done, with many artists creating waitlists. Each artist had their own individual style; some were manwah (Korean version of animé/manga), some were more photorealistic, others were more cartoony, like mine.

At the time I visited the artist’s stall where I had my portrait done, he wasn’t all that busy. But I saw one of the drawings he’d done and really liked it, so I chose to get mine done by him.

It was about a 30-minute wait to have mine done, and more and more people started lining up after me, so I must’ve gotten there at the right time! It was easy to kill 30 minutes at the market anyways, too. The artist’s name was Darren K; he’d spent some time in Edmonton so we talked a bit about that. He was really nice. Here’s a link to his blog, where you can see some of his other illustrations: http://blog.naver.com/ltdco

Those are the drawings (images are taken from his blog) that caught my eye.

Overall, I had a really nice time at the Freemarket. I’ll probably go back, but there are several other weekend freemarkets in Seoul (not ones run by art students; they are similar to the Western flea market) that I want to visit and I think they may end with the cold weather approaching.

The Freemarket’s official website is in Korean-only, but if you want to read more about it you can visit the KTO’s link on it here: http://english.visitkorea.or.kr/enu/SI/SI_EN_3_1_1_1.jsp?cid=1004029

2 thoughts on “My Saturday at the Hongdae Freemarket”