This past Friday, I attended the North Korean Human Rights International Film Festival.

The festival took place in the Edae area of Seoul (near Ewha Women’s University; very famous throughout Seoul). The venue was quite small and intimate, and it took a 40-minute ride on the subway plus a 5-10 minute bus ride from my school to get to.

Only arriving a couple minutes late, I was quickly ushered into the theatre as the opening credits were ending.

(I’ve tried to summarize the film as best I can below, but it might be a little “TL;DR” <– “too long; didn’t read” for some people. In that case, I’d recommend watching the trailer here: http://www.youtube.com/watch?v=A6Y0VAtZ-1M)

The first film I watched was called “Engaged” (약혼). It started off with a North Korean woman and her younger sister attempting to cross the Tumen River into China. The main character makes it, but her younger sister is captured by the NK guards. Like so many North Korean women who defect into China in search of a better life, the woman finds her only option for making an income is through the sex trade. She joins a brothel and is subjected to horrible treatment by the Johns. Each day is an intense struggle as she battles nightmares about her sister (whose whereabouts are unknown to her) and lives in constant fear of being discovered by any North Korean spies who would deport her back to the DPRK.

One day, two men in suits show up at the brothel. They are well-groomed and speak with a different Korean accent – they are South Korean governmental agents who are interested in the woman’s past as an elite North Korean spy. In exchange for her testimony of defecting, as well as her providing some intel on the North Koreans, they offer to reunite her with her sister, who they’ve found to be living in a North Korean concentration camp (as punishment for trying to escape). As if this wasn’t good enough news, the South Koreans also offer to resettle her in Seoul, providing her with a new identity, financial & employment support, bodyguards, and a free place to live. The woman bursts out in tears – this level of kindness is overwhelming to her. She gladly agrees to go on film and tell her story…

… The next evening, she is thrilled to find her sister waiting for her outside her room with the South Koreans. The agents say they must make haste; they’ve heard rumours of some of the North Korean spies catching on to their mission in there in China. They ask the two women to put on blindfolds as they enter a car, to protect their identities, and say that they will drive to a safe house immediately before continuing onto Seoul.

The next morning, the woman wakes up to see her sister lying next to her; she smiles and remembers – she is finally safe. She glances around the room, and all of the sudden lets out a blood-curdling scream – on the wall are two portraits… one of Kim Jong-il, and one of Kim Il-sung. She’d been conned. The South Koreans were actually North Korean spies, who now had her entire confession on tape. They were in North Korea now.

The agents drag her sister away, who wails “sister, sister!” between tears. Sobbing, the woman is taken away to a torture room, where she is forced to perform blood-curtling acts upon herself in order to prove her loyalty to North Korea. She succeeds, and is “rewarded” with the task of resuming her role as a North Korean spy. The guards said that they would show her family the film footage of her being beaten and raped, then brutally murder them, if she did not agree to resume her post. Her mission? Kill off the South Koreans found to be aiding North Korean refugees in China. Emotionless, she complies.

Eventually, she successfully defects to South Korea, where she becomes something of a celebrity. When she isn’t battling off instances of PTSD, she is trying to fight off reporters who want to hear her story. She becomes engaged to a compassionate South Korean man, and together they try to work through her pain and raise awareness about the human rights atrocities the North is continuing to commit.

The film was incredibly moving and really made an impression on me. The (fictional) movie was commissioned by an NGO here in the South, and it is based on the horrible truth of what many NK refugees risk when they defect to China.

Upon leaving the theatre, I was approached by a man with a camera who was going around the room asking for peoples’ opinions on the film. I agreed to tell him what I thought of it; he thanked be afterwards and mentioned he was the director. I thought it was so cool that he was there, and knew I needed to get a photo with him for my blog. He’s not famous in Korea, but I still thought it was really neat that he was there and interacting with the people who’d just seen his film.

A still from “Engaged” (the woman and her fiancée)

Myself with Kwon Sun Do, the director of “Engaged”.

Some of the actors from “Engaged”. The director was so nice; after I’d asked for a photo with him, he came up to me and offered to take a photo with the cast and me if I wanted. Of course I said yes!

Here’s the poster for the film fest. 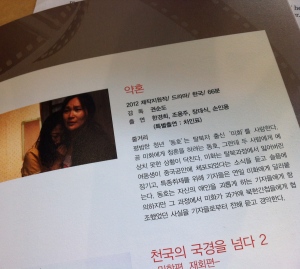 “Engaged” in the festival program.

I also watched a film called “Lady and the Concentration Camp”. It was much shorter than “Engaged”, and appeared to have a bigger budget. However, the whole film was in Korean/without English subtitles, so I had a hard time following it. I knew that the storyline involved some North Korean prisoners trying to escape their concentration camp, but the film had almost a comical air to it and I didn’t understand many of the jokes. I enjoyed “Engaged” a lot more.

At this point, I was running super late for my three-hour “Politics, History, and Culture of Pacific Asia” class. I tried taking the bus back to the subway but got off one stop to early, so I tried to find the station on foot. I failed. I walked verrrrrry far. Like, very far. Into a whole other district of town kind of far (from Edae to Insadong). At this point, I thought it would’ve been faster to just take a bus back to the school. And, when I saw a bus speed past with the label “151 – Chungang University”, I was ecstatic! Now, I just had to find where the stop for it was. I was successful, thanks to a lot more walking and an app I’d downloaded the day prior (called “Seoul Bus”), which is actually one of the most impressive apps I’ve ever used. I’ll do a blog post later about my favourite Korean apps, though.

I made it back to the school scratch-free, albeit 30 mins late for class. I figured that the film festival was still relevant to the course though, so if the prof tried to grill me I could just use that as my excuse 😛

All in all, a great experience at the film festival, though.