On Sunday, a bunch of the exchange students went to the i-Park movie theatre at Yongsan Station, a 5 or 10 minute bus ride away from CAU.

We went with one of the CAU Global Ambassadors, Ha-Young, as she’d posted about the film in our international student facebook group. Apparently, a friend of hers had seen it and said it was a good movie for foreigners to watch. 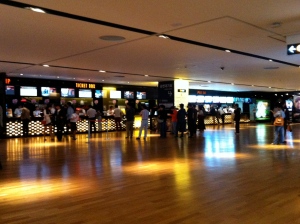 This was the interior of the cinema. I think buying movie tickets is far more efficient in Korea than in Canada. Most people buy them online, but you can also purchase them on-site at the theatre. No matter how you buy them though, you’re actually required to reserve a seat, just like buying tickets for a concert. You can view which seats are left. Sadly for us, our group of 10 people had to split up – two together, four together, and four individually scattered about. I guess most people don’t really care about the assigned seating though, as about six of us were able to sit next to each other without any trouble from anyone.

There was this giant smartboard thing on the opposite end of the hall from the cashiers. You could take a photo of yourself, edit it, and post it on the board. It was pretty cool!

The guys touching each others’ faces up – beautiful.

…Then watching the photo float away among the other ones people had taken.

After that, we made our way to the theatre to watch the movie.

The name of the movie was “Masquerade”; it was basically the storyline of “the Prince and the Pauper” set in Korea’s Chosun dynasty.

Basically, the King (a grumpy and somewhat tyrannical character) hears rumours of treason, and thus trusts his right-hand man with finding a double for him, so he can pretend to be the King at night (in case someone tries to assassinate the King in his sleep). After the King falls ill for some time, the double – a commoner who impersonates the King to make a living – is given the task of standing in for the King during important tasks, such as during legislative meetings. The only two people who know about this “masquerade” are the King’s right-hand man, and an elderly man, who I understood as being the King’s head servant or something. Many things, ranging from the “King’s” new benevolent way of ruling, combined with some unusual mannerisms, start causing the court members ask questions…

The Queen, the “King”, and the right-hand guy. 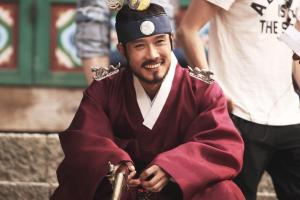 I really liked the actor who played the King. I’m not sure if it’s just his role or if he’s like that in real life, but he seemed very warm and kind. It could just have been some of the side effects of my “yellow fever” which has been slowly developing here (lol)! But no matter what the nationality, you’ve gotta admit, that’s one heck of a smile 🙂

That’s him, Lee Byung-Hun (the actor) out of character. Dat smile…

This was the Queen; I loved her costumes so much. I love seeing Korean traditional dress now, I think normally in the West we are just accustomed to seeing Japanese kimono or Chinese cheongsam, while the Korean hanbok gets too easily overlooked. I will note that her bun is fake (I think most are in traditional Korean dress?); there was a scene at the beginning of the film with her handmaidens pinning it on her head with the pretty stick thing. I kind of liked that, seeing as I wear fake hair too 😛

This character’s name was Sa-Wol. She was probably my favourite person in the film. Basically, she’s sold to a nobleman  in order to pay off some family debts. Her father was a farmer, but after a bad season, combined with some heavy taxes (which were subsidizing the ancient Korean nobility’s extravagant lifestyles… sound familiar?) he had no choice but to take out a loan so the family wouldn’t starve. The interest kept adding up though, and eventually, he was thrown in jail for not being able to pay it off, and died from the torture the guards forced on him. To pay off his remaining debts, Sa-Wol and her mother were sold separately as servants. Sa-Wol was sold to a corrupt nobleman, who took her virginity (despite her being only a child) and treated her horribly. She was sold from there to the “King”, as a kitchen assitant. In the scene where she tells this story to him, after he asks about her background, I definitely shed a few tears! She was an incredible actress.. Sadly, her character ends up taking her own life in an effort to save the “King”, as she had been previously burdened with the task of being the royal food taster. Even though she’d been payed off to slip the poison into his food, she put it all into hers, and in doing so, saved his life. The King was distraught, as he’d promised Sa-Wol he’d find her mother for her, after hearing her tragic story of her family’s separation.

Overall, it was a great movie.

You can watch the trailer (with English subtitles) here:

One thought on “♪ Let’s go to the movies ♪”